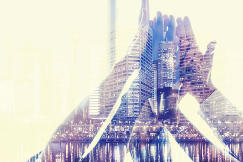 One focus of JERA Partnerships is Behaviors of Cohesive Teams.  Unfortunately, Virtual Teams (VT’s) seem to find this to be more of an issue then their collocated counterparts. There are several components that need to be in place in order to create a cohesive and sustainable virtual teams. Part two will cover the final two components to consider when building a Virtual Team.

The High Five of a Cohesive Team Are:

Just because someone is a great leader in a traditional work environment doesn’t mean they are a going to be successful in a virtual team environment.  The skills and abilities needed as traditional managers are still in play.  However, there are additional requirements and a different emphasis on them for leaders that seldom have face-to-face interaction with their team.

Virtual team leaders must exhibit a pronounced ability to build good relationships – and be willing to put in extra effort to ensure that this happens on a dispersed team.  As importantly, they must be able to establish exceptional trust; about themselves, within the team and between the team and the parent organization. When statistics are sited for the failure of many VT’s, a lack of trust is usually at the top of the list.

In the virtual environment, the ability to communicate with people, when there are multiple forms of listening and learning and no visual clues to help a leader determine if their communication is effective, is absolutely crucial.  Leaders need to prepare more completely for meetings and one-on-one conversations, and in ways that accommodate all their team members learning styles.  Additionally, these leaders must be viewed as actively listening to those they lead.  It is difficult to get people to actively engage online.  If leaders are perceived to be interested in communicating in only one direction, the team will shut down.  Remember, in the virtual team world, silence is not golden or “agreement” it’s the most common response to “something gone wrong.”

Decision making can be extra challenging in the virtual world.  Virtual team leaders MUST have a high level of Emotional Intelligence.  The ability for leaders to recognize their own emotions, other people’s emotions, and identify them appropriately in a remote environment is critical.  These insights will then be used to shape their team’s thinking, behavior and actions to adapt the work environment to achieve team goals.  Those chosen to lead Virtual Teams should have a track record of producing results as well as aligned and engaged teams.

Quite simply, not everyone can work on a virtual or distributed team. Most obviously, people that require significant structure in order to do their best work, may find the inherent ambiguity of virtual teams a difficult environment in which to operate.

Those who have difficulty working with limited or no social interactions at work may struggle.  Some individuals struggle with the lack of visual clues from facial and body language and find themselves challenged with issues of relationships and trust.

Successful virtual team members are unique in many ways.  As with selecting VT leaders, the choice of team members must consider qualities beyond subject matter expertise and experience. Again, behavioral interviews along with effective personality and team assessments, are of great value. Evaluation of potential team members, both domestic and global, should include: ensuring they can clearly read relevant materials; comprehend, listen, express their own thoughts and idea; be articulate in their discourse and speak a common language.  This “common language” will be different for different teams.  Sometimes the common language is a unifying technical language.  This is seen most easily in the scientific, IT and medical worlds. Sometimes it only needs to be a designated spoken or native language and sometimes there is a need, on very diverse teams, to create a language consisting of terms clearly defined by the group.  As an example – one of the first things a team may need to do is build a common vocabulary by stating – “when we say ‘x” that means the following…” Different teams in different parts of the country or world may use the same word, yet it has differing meanings in those locations.  Clear communication is critical.

Those valued members of the organization that may not be comfortable in the virtual team environment should, where appropriate, take on a significant role in either the strategy or special resource teams where they can make significant contributions to the project and team.

The best virtual team members thrive in interdependent work relationships. They are typically self-reliant and self-motivated with the ability to tolerate ambiguity.  They are usually independent thinkers who take the initiative and control of their circumstances and find excitement in things when working by themselves.

Additionally, individuals must clearly understand both individual and team goals and be comfortable making choices without constant supervision.  Working remotely, they also need to be prepared for things that seem to come “out of the blue” and require a change in course.  They should also be able to anticipate and handle the ever present SNAFUs that will surface on dispersed teams.

When working alone, there is no one to appreciate one’s efforts or what is being contributed – in many respects, it really comes down to an individual’s personal satisfaction in what they have accomplished as well as appreciating the success of others as well as that of the overall team.

The above is the second in a series of articles discussing the creation, development, and care of effective dispersed or virtual teams.  David spent 18 years working in these types of teams, from Individual contributor to director of a team of field based engineers and support staff.  These articles are based upon his successful experiences both leading and participating in virtual teams.

This website uses cookies to improve your experience while you navigate through the website. Out of these, the cookies that are categorized as necessary are stored on your browser as they are essential for the working of basic functionalities of the website. We also use third-party cookies that help us analyze and understand how you use this website. These cookies will be stored in your browser only with your consent. You also have the option to opt-out of these cookies. But opting out of some of these cookies may affect your browsing experience.
Necessary Always Enabled
Necessary cookies are absolutely essential for the website to function properly. This category only includes cookies that ensures basic functionalities and security features of the website. These cookies do not store any personal information.
Non-necessary
Any cookies that may not be particularly necessary for the website to function and is used specifically to collect user personal data via analytics, ads, other embedded contents are termed as non-necessary cookies. It is mandatory to procure user consent prior to running these cookies on your website.
SAVE & ACCEPT