The Five Behaviors of a Cohesive Team: How does it work at work? 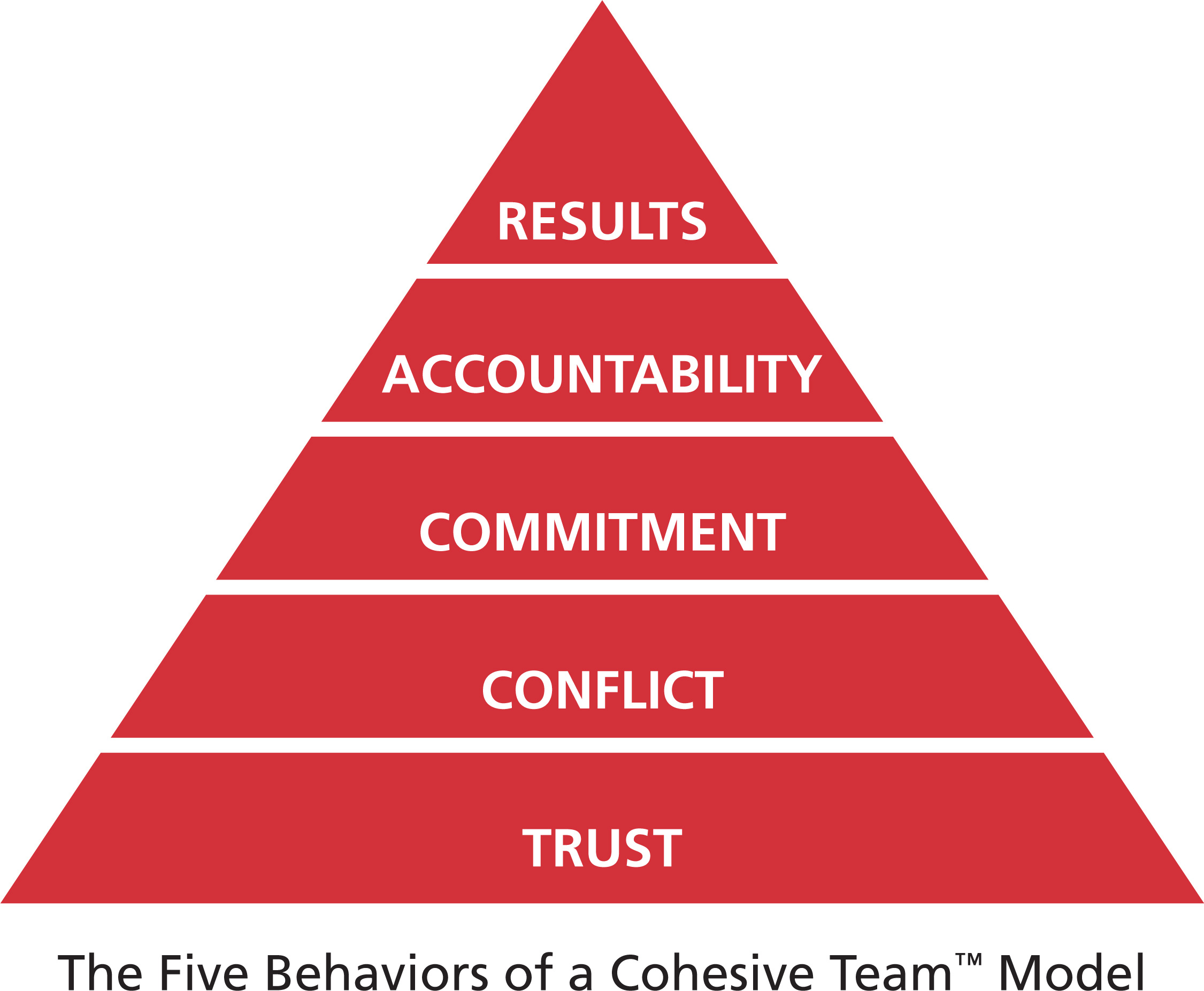 We at JERA Partnerships spent two days last week participating in Colorado showcases of The Five Behaviors of a Cohesive Team program with the program’s publisher, Wiley.  For those of you not familiar with the program, it’s positive spin on Patrick Lencioni’s best-selling book, “The Five Dysfunctions of a Team.”  For those who know the book or program, you’ll know they’re both based on five core behaviors or the absence thereof:  Trust, Conflict, Commitment, Accountability, and Results.   Since the showcases, I’ve been thinking a lot about how I’ve seen these behaviors play out in professional environments.

Let’s start with Trust – Trust is the foundation of the entire thing; if a team doesn’t truly Trust one another, any progress made on any of the other fronts will either be short-lived or a false summit.  The formal definition of Trust is a belief that someone or something is reliable, good, honest, effective.  I think this is perfectly applicable to Trust in teams at work.  It’s more than that, though.  It seems that the key thing missing is that we need to Trust our colleagues’ good intentions.  The vast majority of people on earth want to do good work, but guess what?  We’re all humans…which means every single one of us is hard-wired to make mistakes.  On a team, we need to Trust that when one of our teammates drops the ball, it more than likely wasn’t intentional.  If we foster an environment where mistakes are an expected part of execution and not the end of the world, we see benefits like people willing to admit their mistakes, their weaknesses and ask for help when they need it.

On to Conflict, this is terrifying for some people even to consider, and it’s a key part of building an effective team.  It’s also the one piece of the puzzle that I feel is substantively different from how we tend to view Conflict in our society.  The dictionary defines Conflict as a strong disagreement between people, groups, etc., that results in an often angry argument.  In a work setting, Conflict is about unfiltered debate on issues rather than personal arguments that lead to hard feelings.  It’s being willing to openly speak your mind, make your case, hear the opposing views, use all of the shared knowledge to reach a decision, and move on to the next thing.  In fact, Conflict at work, on a team that truly trusts each other, is not only healthy but necessary.

The third behavior is Commitment and while this doesn’t fit the formal definition exactly, a promise to do or give something, considering Commitment in a team environment simply adds a new layer.  If everyone has the opportunity to be heard about an issue through using appropriate Conflict behaviors, Commitment will follow.  Because everyone on the team had the opportunity to voice their view, hear the opposing views and understand how/why the decision was made, Commitment will naturally occur…because they had the chance to weigh in, they buy in.

Next, we have Accountability which is defined as an obligation or willingness to accept responsibility or to account for one’s actions.  While this personal Accountability is certainly part of the behavior on a team (this goes back to Trust!), colleagues also need to be willing to hold their teammates Accountable – even when they’re just peers, which can seem daunting.  However, when a team Trusts each other, has used healthy Conflict, and is Committed to a singular plan of action, holding each other Accountable becomes a natural part of the execution of the plan.

And finally, Results!  I guess Results isn’t necessarily a behavior, but on cohesive teams, it becomes a deliverable expectation.  That said, in a team setting Results is the one thing that fits the formal definition exactly: to happen because of something else that happened or was done before.  Our tag line at JERA Partnerships is The Promise of Success Earned, by which we mean that the actions we take today greatly influence our opportunities for success in the future.  And, regardless of how we define these behaviors, we know that when a team can build a culture of Trust, Conflict, Commitment, and Accountability, extraordinary Results are sure to follow!

This website uses cookies to improve your experience while you navigate through the website. Out of these, the cookies that are categorized as necessary are stored on your browser as they are essential for the working of basic functionalities of the website. We also use third-party cookies that help us analyze and understand how you use this website. These cookies will be stored in your browser only with your consent. You also have the option to opt-out of these cookies. But opting out of some of these cookies may affect your browsing experience.
Necessary Always Enabled
Necessary cookies are absolutely essential for the website to function properly. This category only includes cookies that ensures basic functionalities and security features of the website. These cookies do not store any personal information.
Non-necessary
Any cookies that may not be particularly necessary for the website to function and is used specifically to collect user personal data via analytics, ads, other embedded contents are termed as non-necessary cookies. It is mandatory to procure user consent prior to running these cookies on your website.
SAVE & ACCEPT